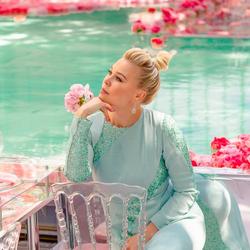 An exclusive story by Xenia Afanasieva about one of the most grandiose weddings of recent years, which took place in June and became a project of the season.

The idea and concept of the wedding

“To the wedding residence of Xenia Afanasieva’s couple
went after the agency helped the groom organize a luxurious
Victoria’s hand and heart proposal.

Future newlyweds wanted to have a wedding in nature, outside the city. But already
a ready-made place to do something unusual and large-scale, not
was. It was planned to invite about a hundred guests, and we knew we needed
a large area for the event, the installation of the stage, the dance floor and,
of course, the realization of our unconventional idea.

It was decided to build an ideal hall surrounded by beautiful nature from scratch. A pavilion with a transparent roof and walls 10 meters high was erected. The pavilion of 600 square meters resembled a French greenhouse. When we discussed the decor with the newlyweds, I suggested not to focus on the classical design of tables, but to consider another option – to create a reservoir with lilies in the hall. 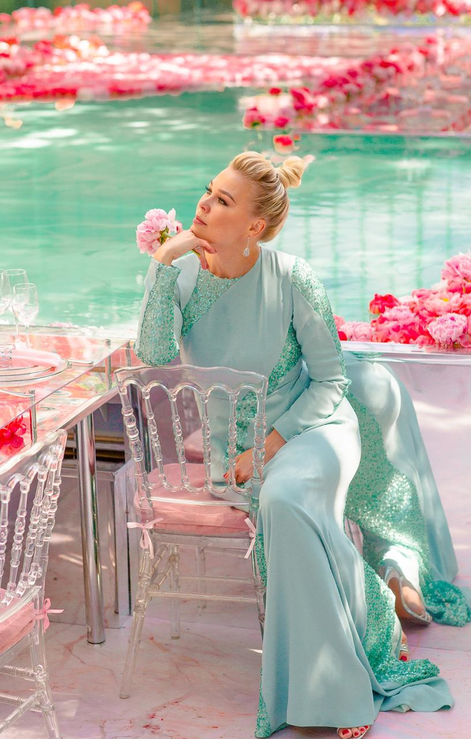 The unique idea proposed by the organizer was immediately liked by the couple. At first, we planned to find living lilies, but quickly came to the decision to abandon it, because we could not achieve a beautiful color palette. While preparing for the wedding, I began to study literature related to different kinds of lilies. It turned out that the largest lily in the world is called “Victoria Amazon”, and it blossoms only at night, becoming pink. So our concept began to develop… 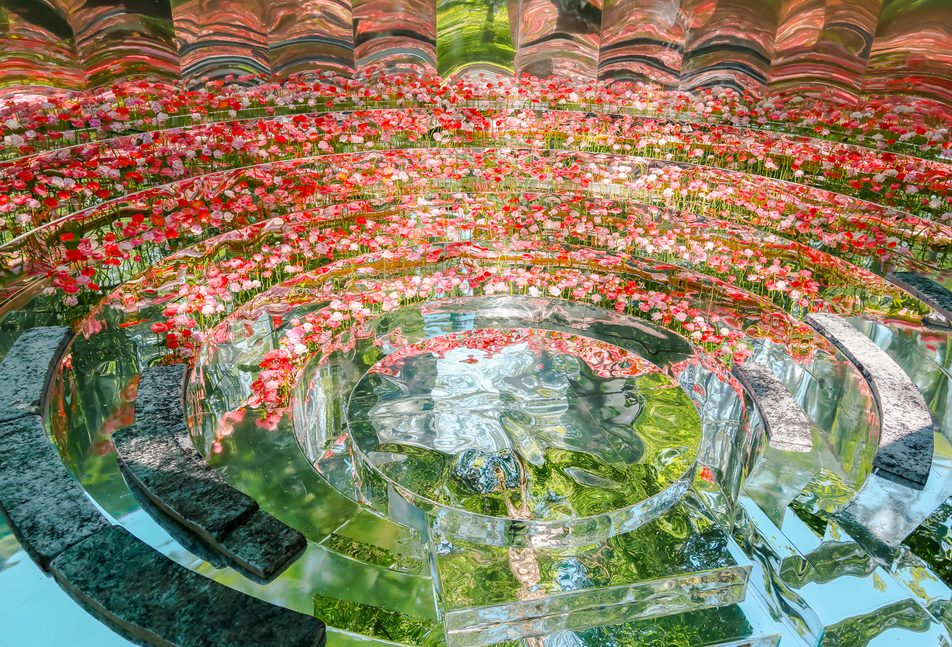 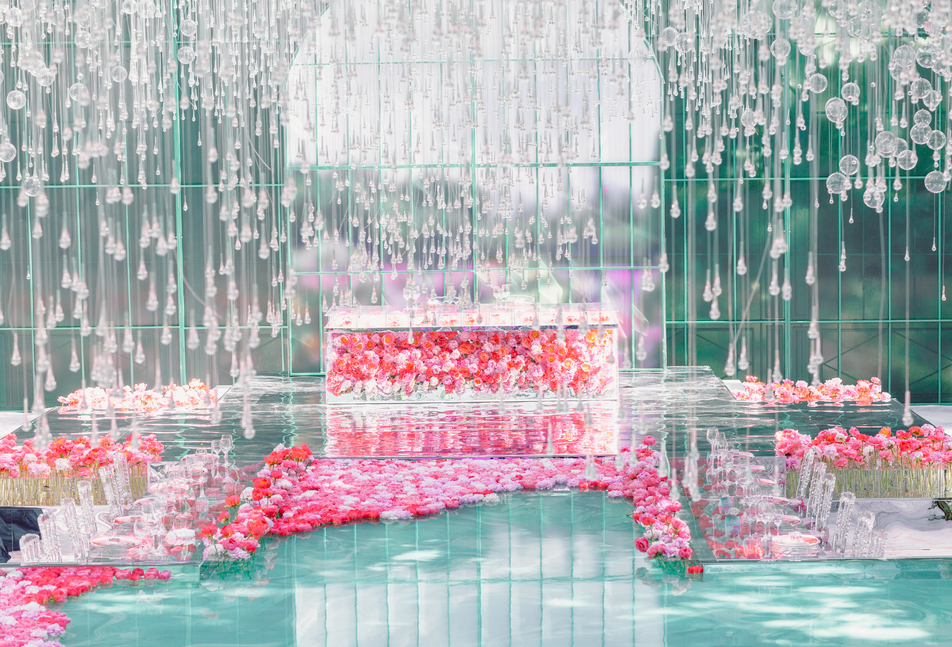 When the decorators and I were developing sketches, we thought for a long time how to diversify the interior design of the pavilion. I ended up with the idea of adding tall trees with sprawling branches reaching the ceiling of the greenhouse. The decorators added beautiful crystal chandeliers to this idea and developed a unique design for the flower presidium. We decided to close all the lighting and sound equipment with beautiful French screens to achieve a hundred percent immersion in the atmosphere of the flower greenhouse. The final touch was a natural floor with a print repeating the stylistics.

During the week the installation of the pavilion lasted, florists and decorators worked for five days, and a real pool was built for two days. In total, hundreds of specialists spent more than ten days creating a paradisiacal oasis, where the newlyweds and their guests found themselves on the wedding day. 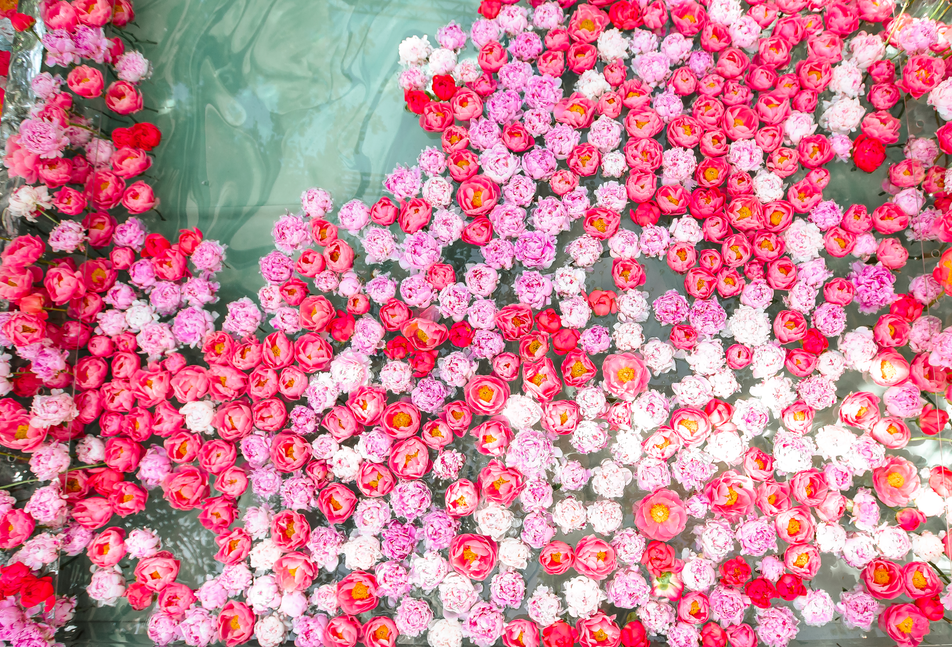 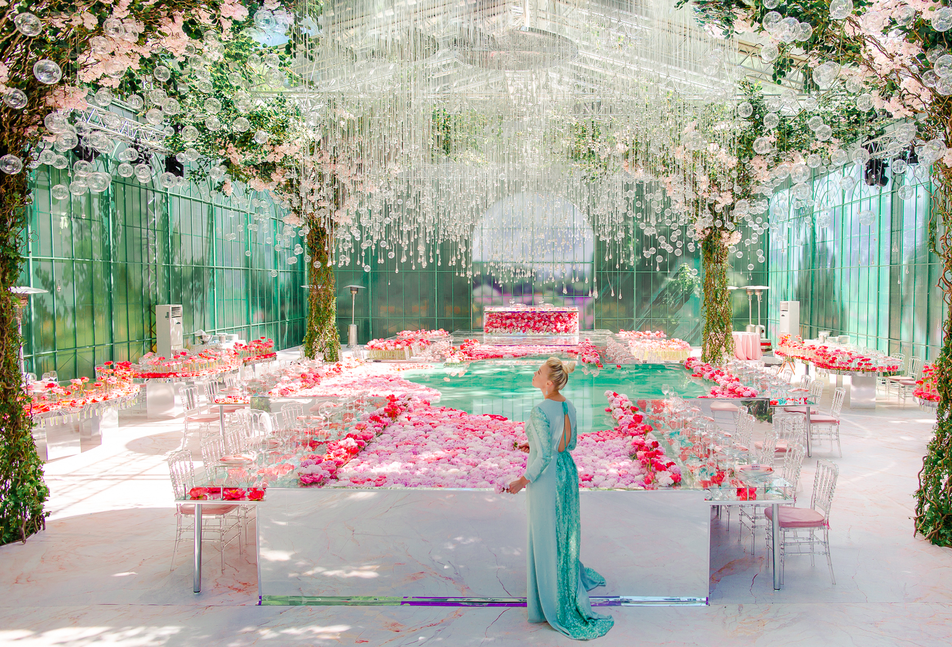 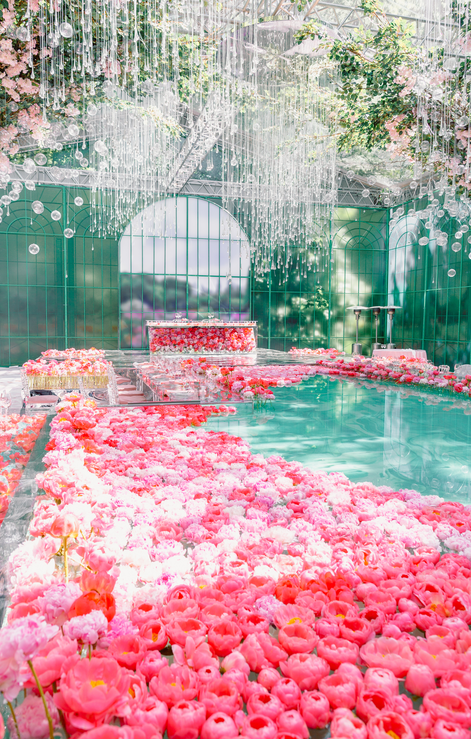 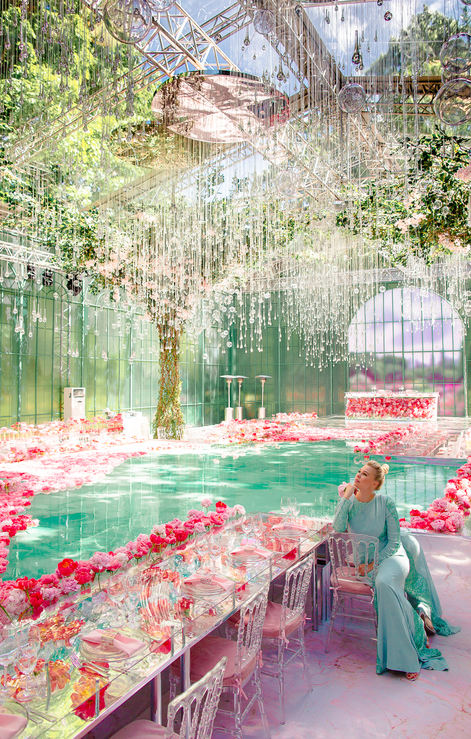 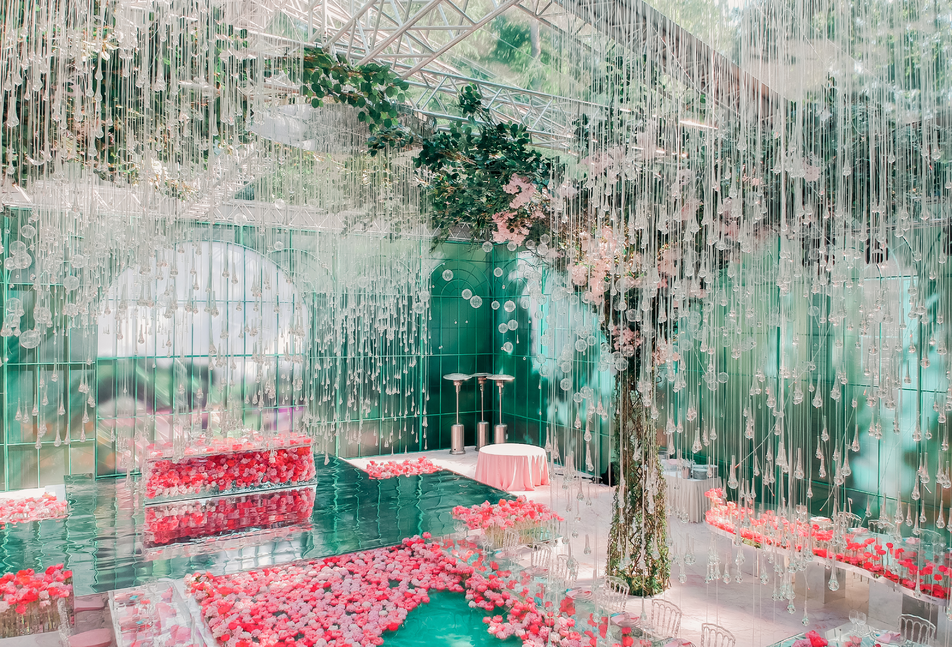 Victoria has great taste, so her choice was elegant and
stylish. The image that the bride chose emphasized her grace: Hollywood
a wave and a gentle, exquisite makeup.

The newlyweds climbed a long mirror staircase, framed by greenery and flowers, to the French greenhouse. This location became one of the favorite places for guests to take pictures.

The registration ceremony was hidden from the eyes of the guests before the beginning, after which all those present had a view of the magnificent amphitheatre of flowers. 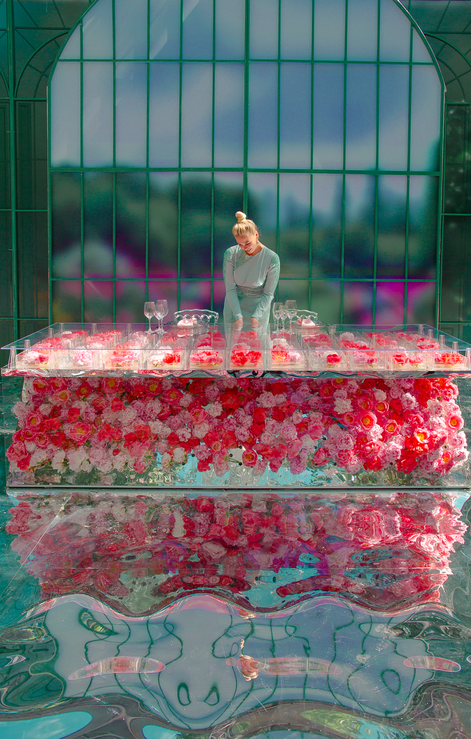 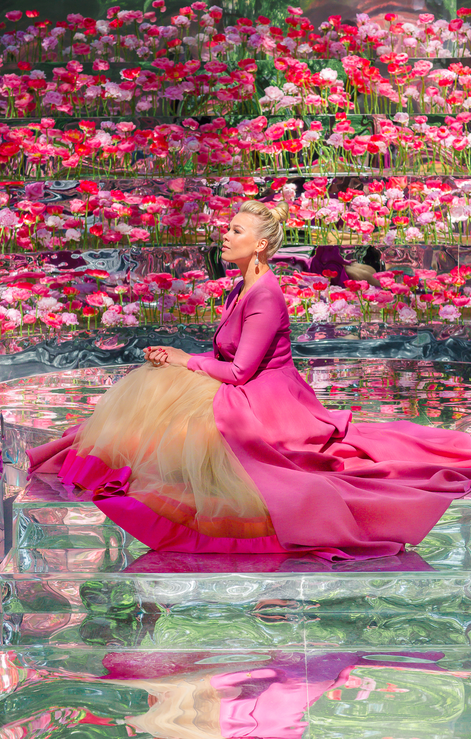 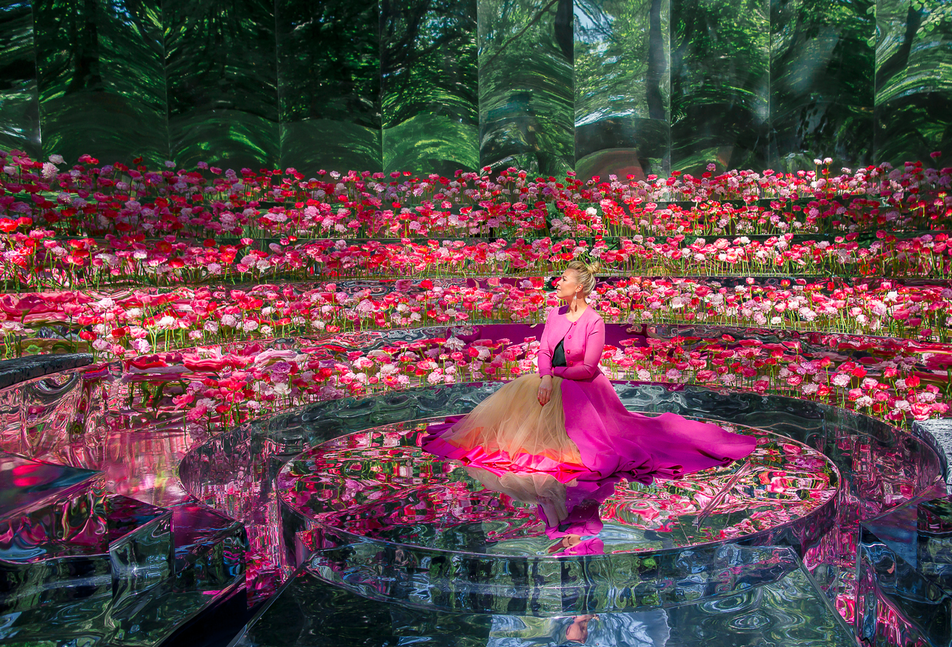 We’ve changed the standard scenario
ceremonies. When all the guests took their seats in the amphitheatre, first, to the music
Lara Fabián, the bride showed up and walked downtown with her back to the entrance. So the bride appeared and stood up in the center, with her back to the entrance.
so when the groom walked into the hall, he saw Victoria’s silhouette in a gorgeous dress
with a long trail and a six-meter veil. This delighted everyone
…no one’s ever seen anything like it before.

The program as well as possible supported and revealed the concept of the wedding. Discovery
the evening was a story of this romantic legend and a dance performed by the artists
in Amazonian goddesses costumes with lilies in their hands. Guests were invited to
a gourmet dinner at tables built into a pool where thousands
of flowers. The newlyweds’ table was on a hill surrounded by gentle buds
peonies.

One of the most touching moments was the first dance of newlyweds. On this day, numerous stars personally congratulated the bride and groom. 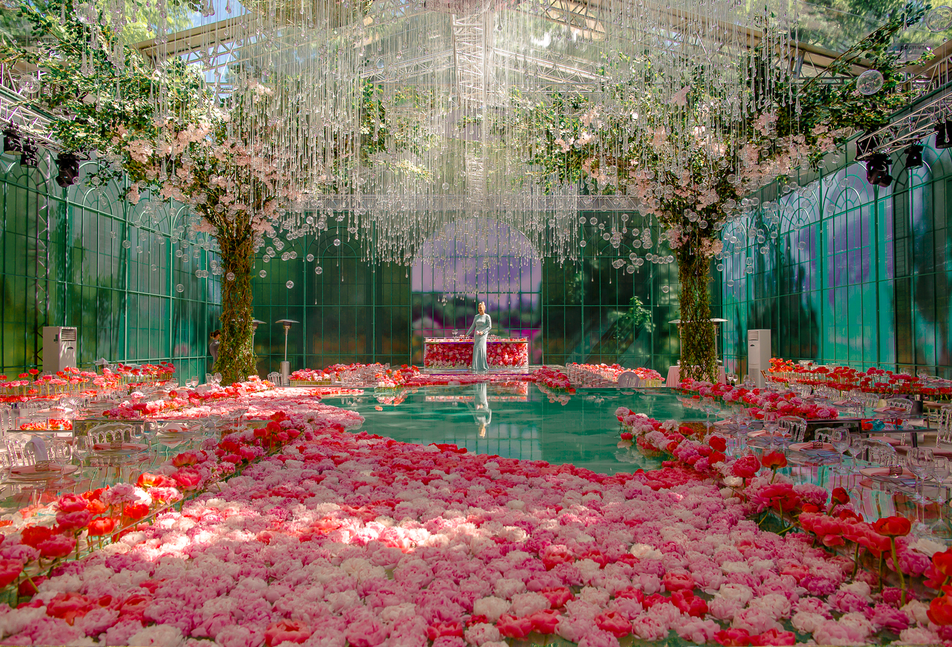 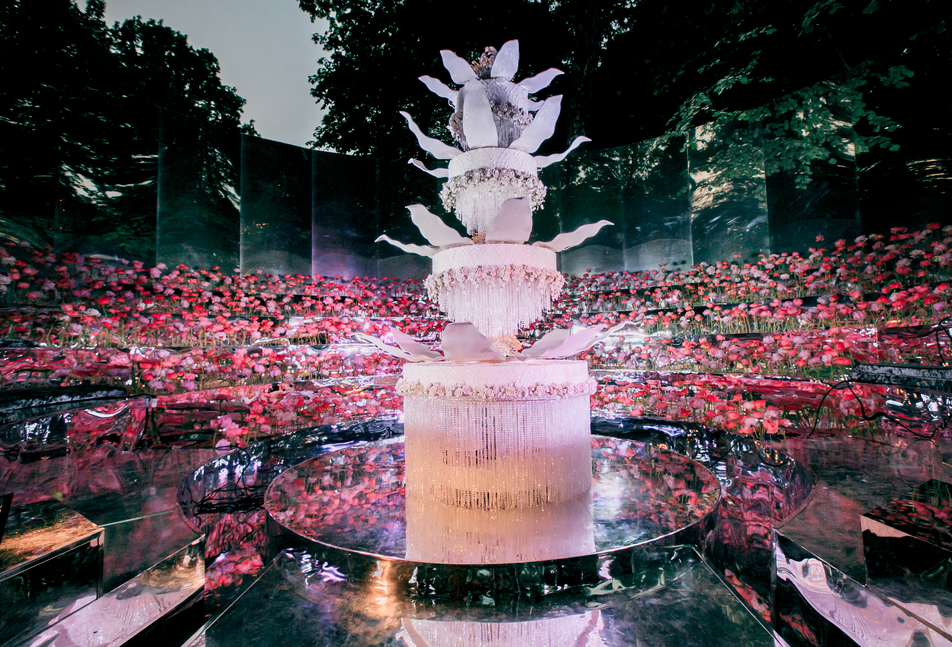 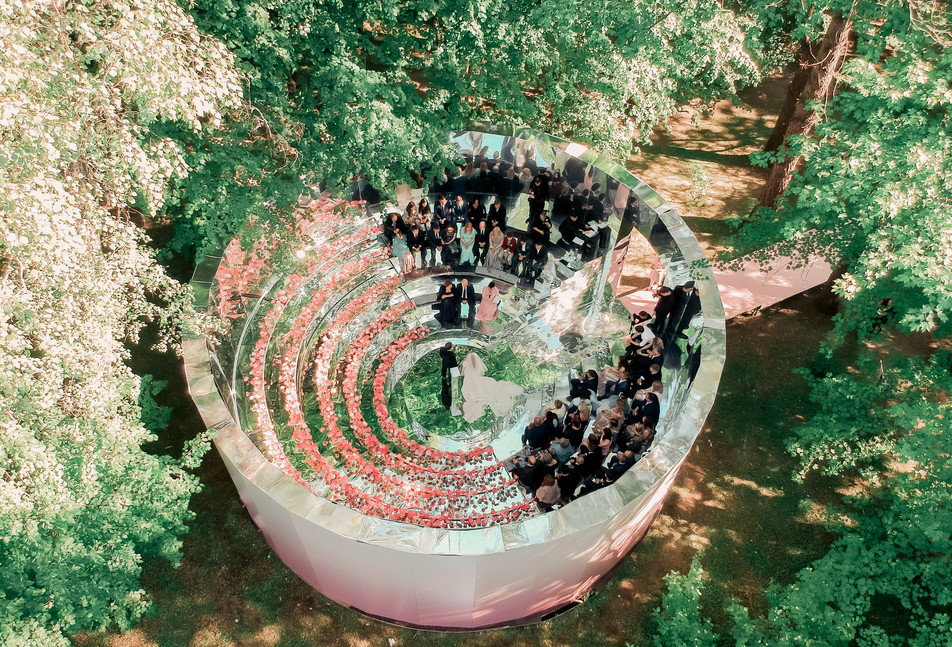 At the end of the evening, guests could watch the fireworks, which lasted 15 minutes and included more than two hundred salvos. The unusual solution was a laser show shown in the sky and based entirely on the history of the couple.

The final chord was the presentation of the wedding cake, specially designed for the wedding in the form of a lily, which opened when the newlyweds approached.

We organized a solemn cutting of the cake in the amphitheatre, where the ceremony took place. As the guests walked down the alley, their entire journey, like the Champs-Elysées of Paris, was lit by thousands of lights.